Although its present appearance owes much to 19th century alterations, the origins of 58 The Close lie in the 13th century and the overall shape of a central hall (originally open to the roof) with two service wings still remains.

At first the residence of one of the canons [clergymen] who served the Cathedral it later passed into the hands of the Bishop of Salisbury. It is probable that use as a storehouse and administrative base for the Bishop's household led to its name of The Wardrobe, a title first recorded in 1543.

In 1568 the Bishop exchanged it with the Dean and Chapter for a more convenient building and it was then let to a series of non-clerical tenants. During their occupation it underwent many alterations. In the 18th century members of the Coles family divided the upper and lower halls, forming on the ground floor an entrance hall, staircase hall and dining room, the arrangement which survives today. A central entrance replaced the large window on the courtyard side of the original lower hall.

Further building work in the 1830s gave the east front its gables, barge boards and gothic portico. The first tenant following these renovations was Dr John Grove. His daughter Henrietta married James Hussey, a local JP. The house remained in the Hussey family until James and Henrietta's daughter Margaret (who was born in the house) died at The Wardrobe in January 1941 at the age of 90. It then ceased to be a private residence.

After use in the Second World War as a hostel of the Auxiliary Territorial Service (ATS) it was rented in 1945 by the Diocesan Training College for Schoolmistresses (based at The King's House) to provide accommodation for 25 students and 2 members of staff. This use continued until 1969. The building then remained empty for some years, with its future in doubt.

The Wardrobe was suggested in 1973 but the cost of repairs and alterations was thought to be too high. Some years were spent in considering other possible sites, but all in vain. In 1976 a chance meeting with John Smith of the Landmark Trust offered a new way forward. The Trust would contribute to the cost of alterations in return for a flat in The Wardrobe. A 99 year lease was purchased from the Dean and Chapter of Salisbury Cathedral and building work finally started on 2 July 1979, with an estimate of completion in just under a year.  As with most old buildings there were hidden problems, including structural problems upstairs where a steel framework had to be installed, so the work took longer than expected, not being finished until October 1980. 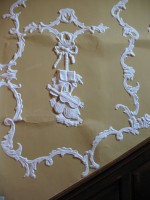 Alterations included re-instating the large window instead of a central doorway in the porch and adding a new door at each side. An internal doorway with its elaborate door casing was moved to permit a more logical route round the Museum. Almost all the ground floor became the Museum with the upper storeys providing offices, Library, storage space and other facilities. Partitions were removed to create what is known as the Regimental Room on the first floor and to reveal once again its 17th century fireplace. A large dormer window was inserted to provide light to the Landmark Trust flat's living room. This has now weathered so well it is hard to believe it has not been there for centuries.

Following a trial season in the summer of 1981 the Museum was officially opened by HRH The Prince Philip, Colonel-in-Chief of the Duke of Edinburgh's Royal Regiment, on 29 July 1982.

During its time as a private residence this was both ornamental and functional with fruit trees and a kitchen garden. Later, as clearly shown by a 1960s aerial photograph, a grass tennis court stretched between the copper beech tree and the river. However, by the time the building became the Museum the garden had been neglected for many years. Except for an area used by Bishop Pike to grow vegetables it was full of brambles and weeds and an expensive clearance operation was needed to produce a tidy, useable space. 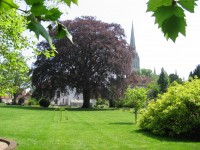 Of the heritage trees in the garden in 1980 the magnificent copper beech on the lawn and the London plane and horse chestnut near the river still survive. The mulberry tree, allegedly one of two given to Salisbury by Charles II in 1660, was a victim of the 1987 hurricane. In 1996-7 the garden was redesigned to include more flower beds and a pathway leading down to the river. A new mulberry tree was planted in 2000.  The memorial to members of the Regiment and its predecessors was installed in what was then the Rose Garden in 1992. There was a complete refurbishment of the Memorial Garden in 2004-5, together with new memorial stones, to produce the layout seen today.

A number of memorial plaques, removed from a variety of previous locations, and new wall tablets recording the names of regimental casualties since 1959 have also been installed in this area.

The garden provides a perfect setting for social functions (both regimental and civilian) with plenty of room for a marquee.  It is also the venue for Museum events, such as those featuring living history groups.

Further details of the history and architecture of the building can be found in Salisbury: The Houses of the Close, Royal Commission on the Historical Monuments of England, published by The Stationery Office, 1993.