Acquired in 1979 and restored over the next two years the ground floor of The Wardrobe opened in 1981 displaying the Collections of the Royal Berkshire and Wiltshire Regiments.  The displays and Collection now include items from the successor Regiments.

How it all Started

The Royal Berkshire Regiment, with its Museum in Brock Barracks, Oxford Road, Reading, and The Wiltshire Regiment, whose Museum was in Le Marchant Barracks, London Road, Devizes, merged in 1959 to become the Duke of Edinburgh’s Royal Regiment (Berkshire and Wiltshire). However the two Museums continued on their separate sites for a number of years. 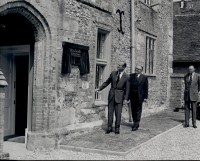 In the 1970s a new united site for both Regimental Headquarters and Museum was sought in Salisbury. The Wardrobe, at first rejected on the grounds of the expense of conversion, was eventually selected and a 99 year lease was purchased from the Dean and Chapter of Salisbury Cathedral. The Duke of Edinburgh’s Royal Regiment Museum was officially opened by HRH Prince Philip, The Duke of Edinburgh, Colonel-in-Chief of the Regiment, on 29 July 1982. As part of a programme to widen the appeal of the Museum the name 'Redcoats in the Wardrobe' was adopted in 1991.

The Museum is restricted by its trust deed to collecting artefacts from the regular, militia and volunteer infantry units of Berkshire and Wiltshire. It does not contain any items from either county's Yeomanry units or other military units directly associated with the two counties. The Museum’s collection is wholly owned by its Trust, the Museum is self-funding and non profit making; any money received, usually through donations, goes straight into the running costs of the Museum covering conservation, maintenance and materials etc.

The Museum currently holds over 34,000 items of which approximately 1,200 are on display, with the rest in reserve storage. There are over 16,000 photographs, 6,000 archive documents, 4,000 medals, almost a thousand items of uniform, about 500 weapons, including swords, rifles, pistols, anti-tank weapons, as well as pictures, flags, ornaments and battlefield souvenirs such as a cannon ball from the American War of Independence.  You can search the Collection by scrolling up to the top of the page, click on "Research" and select "The Collection".

From its official opening in 1982 until 2001, the collection was displayed chronologically in four rooms from the mid 18th to the 20th centuries. Individual display cabinets focused on campaigns, significant battles and themes such as Volunteers. From October 2001 until April 2002, the Museum undertook a major refurbishment (all the work being done ‘in house’) with the emphasis shifting from battles and wars to the infantry soldiers of Berkshire and Wiltshire who fought in them. Many items which had never before been on show were moved out from the reserve collection into the displays. 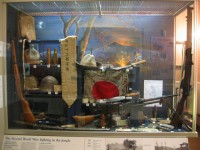 The first two rooms retain a chronological approach, covering topics such as the American War of Independence,  the Battle of Ferozeshah (1845), the Crimean War, the Wars in China, the Battle of Maiwand (Afghanistan 1880), the Battle of Tofrek (Sudan 1885), the Boer War, the First World War, the Second World War, the formation of The Duke of Edinburgh’s Royal Regiment and its involvement in the ‘Cold War’ and Northern Ireland, the formation of The Royal Gloucestershire, Berkshire and Wiltshire Regiment, and latterly the Rifles. The third room covers general topics such as music, food, health and travel, while room 4 displays honours and awards in the form of medals and silver.

The Museum also has yearly temporary exhibitions, usually coinciding with an anniversary, such as 60 Years since D-Day, the Centenary of the end of the First World War, or the Museum's 25th Anniversary. 2019 sees us commemorate the 75th anniversay of the end of the war in Burma, where both the Royal Berkshire and Wiltshire regiments saw service.

In 1999, a recently appointed Curator decided that the Museum could profitably make use of a website, both to advertise itself and to provide extra services for people interested in the history of the Regiments. Over the next few years, the website was expanded to include the War Diaries (painstakingly transcribed by a group of volunteers), part of the Collection (originally about 6000 objects) which all had to be digitally photographed or scanned, the Regimental timelines, the Militia Directory, a Guest Book and an on-line shop. Money to pay for much of this work came from a combination of the Museum’s Society of Friends, Wiltshire Country Council and the 'Window on Wiltshire Heritage' Project. Early in 2007 another major upgrade of the website was agreed which included almost trebling the number of images on-line and the opportunity for people to order copies of these electronically.  In 2019 a new website was launched to be more device friendly.